Robin Ventura had a good baseball career, but he will always be remembered for this...

We live in a changing world.
Admit it or not, we are drawn to change. It energizes us. We like it.

Think of television. A few decades ago the popular shows were Andy Griffith, Bonanza, I Love Lucy, and Leave it to Beaver. I am not knocking these shows at all because I've seen most of the re-runs.
But every episode basically had the same plot. You knew what you were going to get. The script rarely changed and people loved it. Each episode ended with resolution. You could turn off the television and enjoy a piece of cake because everything was okay. Ricky and Lucille were fully clothed in separate beds. The lives of Hoss and Little Joe were threatened again but the good triumphed over evil.
Now...think of the shows that people are drawn to in 2009.
24 & Lost. There is rarely resolution. No one is safe. The plot and the characters are always changing. Every episode leaves you on the edge of your seat. And people love it.
American Idol, Dancing with the Stars, Survivor, Amazing Race, and every other reality television show--every week something new is happening. Characters are eliminated. Things are changing. And people are addicted.

We live in a changing world.

America has drastically changed over the past 40 years. We are more diverse than ever before--racially, ethnically, socially, politically, and religiously.
Last I saw, the average American family will move 11 times. In the years past, families would stay in the same home for decades. This is no longer the case.
Dress codes are changing. Boundaries are changing. Relationships are changing. Neighborhoods are changing.

We live in a changing world.

Here's the question--is the church changing with the world?
Is the church attempting to adapt to a changing world in order to dream with God how we might be able to speak a Word into this change?
We live in a web-based world. What does that mean for the people of God?
This doesn't mean that we let go of core beliefs and values, but it does mean that we must be able to hear the world, understand the world, care for the world, and to be in tune with the world in order to speak a redemptive word into the lives of people.
Posted by Josh Ross at 6:41 AM 3 comments:

It is a brown city. They only get 8-10 inches of precipitation a year. But it is also a gorgeous city surrounded by mountains. Even in April, the tops were covered in snow.
I returned late last night from a 2-day trip to Albuquerque, New Mexico. I was honored to speak at an area-wide youth rally called Spiritual Explosion. The theme for the weekend was "In His Image." Talk about a homerun theme.
The host church was the Riverside Church of Christ and they embody the essence of hospitality. They made me feel so welcome the entire time there. They fed me good, allowed me time to rest, and provided little nuggets of encouragement with constant phrases like, "We woke up praying for you this morning."
The youth rally far exceeded my expectations. It was a very diverse, eccletic crowd. They were hungry and receptive, which can make preaching fun.
I spoke 7 times over a 36 hour period, so I am completely drained today, but it was well worth it.
I missed my own people at SVC yesterday, but I was grateful to be where I was. 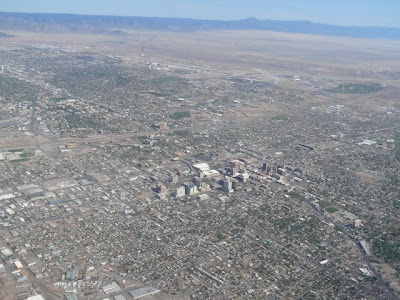 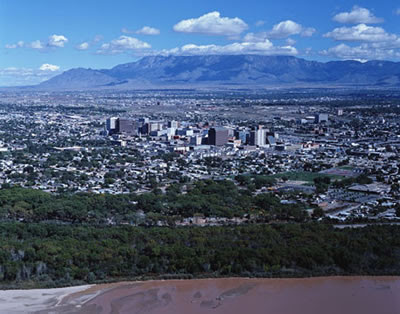 Here is an article I wrote for At Home Tennessee.

The challenge was twofold:
1) Broader audience than just Christians
2) 500 words or less (Hey, I'm a preacher)
Posted by Josh Ross at 9:28 PM No comments:

The Left and the Right

"The left mocks the Right. The Right knows it's right. Two ugly traits. How far should we go to try to understand each other's point of view? Maybe the distance grace covered on the cross is a clue."
(Bono, lead singer of U2)
Posted by Josh Ross at 8:34 AM 9 comments:

And...it was one of the best worship services I have experienced.
The first time I saw "Cardboard Testimonies" I was convinced that it was something every church needs to do. Months ago, I knew that I wanted to do it here at SV...on Easter Sunday...celebrating the resurrection...on the last day of this series in Luke.
I hope to have our video up sometime soon. Words can't express the way God manifested himself through pieces of cardboard.
Below is the church who launched this experience (I think they were the first one) that has transformed churches around the world. Check it out.

Are We Asking Good Questions?

Isn't it bizarre that Jesus usually always answers a question with a question of his own? Jesus was not just the master of story-telling and truth-living...he was also the master of question-asking.
"Have you not read what David and his companions did when they were hungry?"
"Is it lawful to do good or to do harm on the Sabbath, to save life or to destroy it?"
"Can a blind person guide a blind person?"
"What is written in the law? What do you read there?"
"What do you want me to do for you?"
"Did the baptism of John come from heaven, or was it of human origin?"

It is too easy to settle into the mode of "answer-giving." Our pursuit for the answers to our questions is not a bad thing. It is part of the journey of faith. However, it becomes a very dangerous thing when our spirituality consists of having all of the right answers. This desire leads to naivety, pride, and Phariseeism.
You've seen the stats--Christianity in America is declining by the minute. Our younger people are fleeing from the institutional church by the droves.
Here's my observation...and feel free to correct me if I'm wrong...but most of these people are not looking for a church that has all the answers. They are looking for a church that is asking good questions about what it means to live a life of faith.

For example:
The question, "If you died today, would you go to heaven?" is a decent question.
But a better question is, "If you were to live forever, what kind of person do you want to be?"

The question, "How can we stand for peace?" is a good question.
But a better question is, "How are we going about making peace?"

The question, "What must I do to be saved? is a good question.
A better question is, "What does it mean to live as a saved person?"

The question, "What will this nation look like if Christianity continues to decrease?" is a decent question.
A better question is, "Do we believe that the same power that lifted Jesus up out of the grave is still alive in this world...and if so...what does that mean for us?"

Check out this imagery:
When the Lamb opened the seventh seal, there was silence in heaven for about half an hour. And I saw the seven angels who stand before God, and seven trumpets were given to them.
Another angel with a golden censer came and stood at the altar; he was given a great quantity of incense to offer with the prayers of all the saints on the golden altar that is before the throne. And the smoke of the incense, with the prayers of the saints, rose before God from the hand of the angel. Then the angel took the censer and filled it with fire from the altar and threw it on the earth; and there were peals of thunder, rumblings, flashes of lightning, and an earthquake. (Rev.8:1-5)

I read this passage while praying in our prayer room yesterday at SVC. Our 7-Day Prayer Vigil began at 12:30pm immediately following 2nd service. We filled 336 "30-minute" slots. It was awesome to see how God put this thing together.
I woke up this morning feeling the prayers of the saints...knowing that there is around-the-clock prayer taking place at SVC this week.
I stayed after a special worship service last night for a few hours to let late night pray-ers into the building. It was an honor to open a door for people and then to usher them into a prayer room...need I call it--a sanctuary.
Through email and text messaging, I've received two main responses:
1) 30 minutes isn't long enough. It went by too fast.
2) Can we do this more often?

I love the imagery from Rev. 8. The prayers of the saints come before God and when they are hurled upon the earth there is a collision that takes place. The impact of heaven meeting earth has the power to shake foundations. One thing I'm learning as I journey closer to the heart of God is to never underestimate the magnitude of tapping into the power of God. This week at SVC, I pray for heaven and earth to collide!
Posted by Josh Ross at 9:55 AM 5 comments:

A Night to Remember

Confession time...I'm a huge sports fan. Probably too much!
I've been a huge Mavs fan for years now. Last night the Mavs came to Memphis and lost by 5, but it was still a night to remember for the Ross family. My friend, Glenn Hailey, a member at SVC and a huge Griz fan took my family down to the Mavs shoot-a-round before most fans were allowed into the arena. Truitt was living the life. One of his favorite words right now is "SHOOT!" Every time Dirk, Howard, and the other Mavs had the ball, Truitt was encouraging them to "SHOOT!"
Then, we got a few pictures with our favorite players and the best owner in the NBA, Cuban.
I invited Cuban and Dirk to church on Sunday but they declined due to travel plans.
My conversation with Dirk didn't go very well due to the height differential. My conversation with Cuban was rather deep and meaningful:
Josh--"How you doing bro?"
Cuban--"Great. What's your son's name?"
Josh--"This is Truitt."
Josh (holding a Baby Mavs DVD for Cuban to sign)--"Thanks for educating my son. This is a great video."
Cuban (laughter)--"You bet."
Josh--"Did you get you some ribs yet?"
Cuban--"No. I wish. My flight just arrived."
Josh--"Can we get a picture?"
Cuban--"Absolutely."

Needless to say, we're the best of friends now. 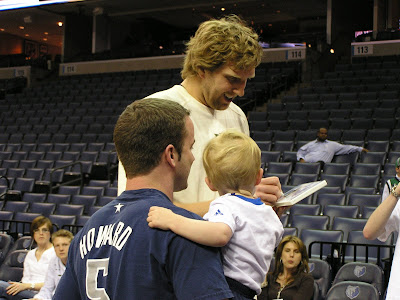 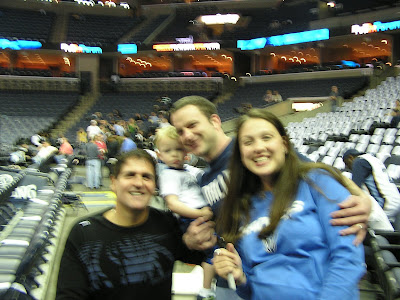 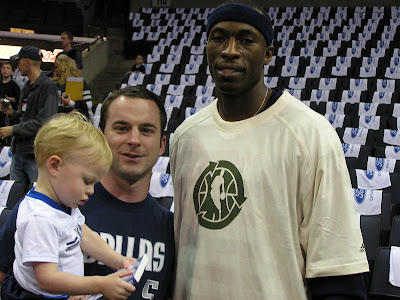 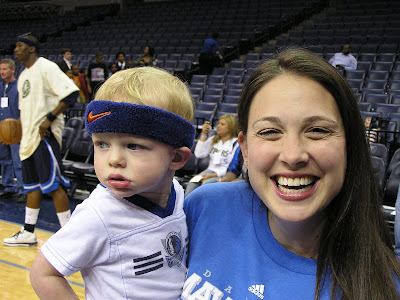 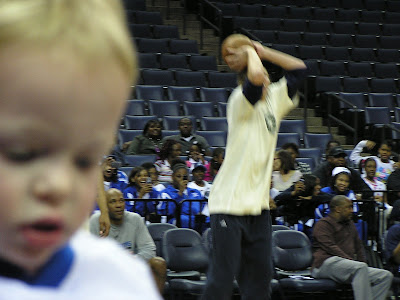 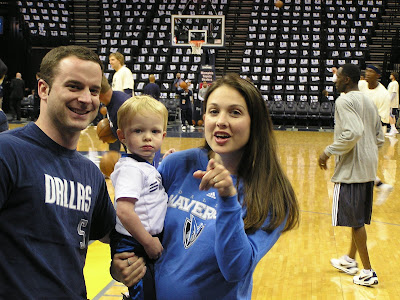 Shaking the Gates of Hell

"Give me 100 preachers who fear nothing but sin and desire nothing but God...such alone will shake the gates of hell and set up the kingdom of heaven on earth."
(John Wesley)
Posted by Josh Ross at 6:57 AM No comments: