What's the Big Deal with "The Purpose Driven Life"? 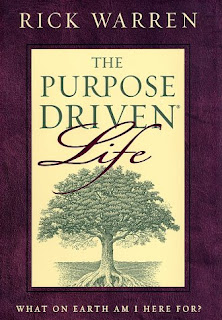 The book was written back in '02.
Seven years earlier he was able to fill the shelves of bookstores with The Purpose Driven Church.
These books have been on my shelves for years, but for some reason, I've never read them. I've never even opened them. I don't know why, just never felt the urge to. Maybe it's because I had categorized it as another self-help book that belongs next to stuff about finding your best life and steps to a happy life with God. I'm turned off by books like that because they tend to water down the gospel to emotional uplift with theology that is more about expanding the pocket book and raising the gitty-meter than following in the ways of Jesus. They are more interested in Americanizing than discipling...but enough of that before I go on a longer rant.

I began working on a sermon yesterday for January 3rd and I've decided to preach on purpose. We all want to live with purpose and meaning. We want our lives to have significance.

So, I began thinking...a guy wrote a book that sold over 30 million copies. He made so much money off the book that he returned his 25 years of salary to the church and quit taking a salary, and I'm going to assume that his annual salary was a little higher than the average Church of Christ minister. Just an assumption. He and his wife "reverse tithe." Instead of tithing 10%, they tithe 90% and live off 10%.

AND ALL THIS BECAUSE HE WROTE A BOOK ON ONE WORD, "PURPOSE".
Not bad. I wish I would have come up with the brilliant idea.

He writes with great certainty. The opening words are as follows:
"By the end of this journey you will know God's purpose for your life and will understand the big picture--how all the pieces of your life fit together. Having this perspective will reduce your stress, simplify your decisions, increase your satisfaction, and, most important, prepare you for eternity."
Within the first few statements, Rick Warren was able to lure people in. He hooked them because he went after the desire of every one's heart...to live with purpose.

So, I picked up the book yesterday and I gave it a read. All 40 chapters. All 319 pages. I wasn't so much interested in personal reflection as much as I was interested in this question, "Why were over 30 million copies sold"?

The book was very basic and simple. There weren't innovative ideas. It was void of mind-boggling revelations about God. In fact, I don't remember ever thinking, "I've never heard that before" or "I've never heard it put that way."

It was a good book, and I could even recommend it to someone interested in spiritual growth.

This isn't a knock on Rick Warren, because I really like him, and it's not a knock on the book, but the fact that 30 million copies were sold tells me more than the content of the book. People want to live with purpose.
Are we presenting the gospel in a way that gives meaning to lives?
Are we living the life of Jesus in a way that redefines a purposeful life?

Just some thoughts.
Posted by Josh Ross at 7:15 AM 5 comments:

The Bible and Babies

I don't get infertility, and I need to be reminded of Isaiah 55 when I engage in the following conversations.

When Kayci and I began trying to have our first kid, it took about eight months before she got pregnant. Eight months seemed like forever. Don't get me wrong, it was fun and gratifying (sorry mom and dad if you're reading this), but it was eight months of delayed "periods" until Kayci would walk in the room and say, "Not this month, Honey."

And honestly, the Bible doesn't seem to offer much help here...at least when it comes to someone who suffered from infertility, only to remain infertile.

There are a lot of fertile people in Scripture. It seems that every one-night-stand results in a pregnancy:
Judah and Tamar: one night=conception.
David and Bathsheba: one night=conception.
If this were the case in Hollywood, the show "Friends" would have had been a show about pregnancy. Phoebe, Monica and Rachel would have looked like Jon and Kate Plus 8with a number of kids to walk into the Coffee Shop on the corner.

In Scripture, when we read about a barren woman, lights are flashing to make us aware that something is about to happen. Sarah, Rebekkah, Rachel, Hannah, Elizabeth...they are barren, but their barrenness bears witness to God's ability to perform a miracle in the elderly. He speaks life into barrenness and the children become major characters in the unfolding drama of God's activity to redeem people.

I wish there was a woman in Scripture who was barren and she died that way...not because I wish depression upon someone, but as a way to give us someone to relate to who struggled with infertility yet they leaned on God's provision all the way to their death. Some people argued that God closed Michal's womb, but what we read is this, "And Michal the daughter of Saul had no child to the day of her death." I don't think it was because of God's wrath, but rather because "it" never happened again between David and Michal.

I had a friend whose wife did the "in vitro" thing and it didn't work. In our conversation I responded with something like, "Sarah was 90 when she was pregnant." For some reason (wink-wink), that didn't bring much comfort. His response was, "So you're telling me that in the year 2075, we can expect our first child?"

I witness so many teenage girls who are far from ready to nurture children who become pregnant. And then I think of a number of people who I am extremely close to, who are in healthy marriages with the desire, passion, and ability to raise children to the glory of God...and I can't help but pray, "God, why would you not want to place a child in this family where they will be raised in a home that has been dedicated to the Lordship of Jesus?" I know people right now who would give anything to experience morning sickness, backaches, and swollen feet just to have a baby growing in their belly. And all I get is Isaiah 55, "...my thoughts aren't your thoughts...my ways aren't your ways..."

For all of you out there, QUIT going up to young-married-folks with questions like, "When are you going to have kids?" or "You just turned 30. You're running out of time" or "Isn't it time..." because you have no clue what kind of salt you are pouring into wounds. You don't know how many of those people wrestle in prayer every single day over this.

I know that God has worked through adoption in some powerful ways and I praise him for that avenue. It is truly a beautiful thing.

For those out there struggling with infertility, may the God who spoke life into the world speak life into your barrenness. May the power of Jesus that was able to heal diseases by one touch, be upon you. I pray for God's favor to rest on you.
Posted by Josh Ross at 6:54 AM 4 comments:

I hope to have a new post up later today or early tomorrow concerning infertility. It's a topic that won't get off my mind.
However, no time to write now.
Posted by Josh Ross at 11:01 AM No comments:

This helps to put things in perspective.

Props to single moms, I don't know how you do it.
My heart goes out to Kayci every Sunday morning.
I leave the house around 5:30 on Sunday's. I like to get to the office to pray and go over my sermon. Early service begins at 8 and late service begins at 11. This means that Kayci is on her own on Sunday mornings. She gets both boys ready, piles them in the car, and drives to church. Once she is there, she has to take Truitt to Bible Hour about 30 minutes into the worship service and then Noah usually needs to be fed at some point. So, she gets to enjoy only a few minutes of church. Some days she asks me, "Why did I go to church today?"
Thank God for people who have reached out to her. Sue Petrey called me one Sunday morning at 7 and she was ready and willing to drive to our home to help with the boys. Others volunteer their time to take Truitt to Bible Hour or to hold Noah during worship.
But for all you single moms out there, I admire you.
For all you church leaders and Christ-followers out there, go up to single moms and sincerely ask them what they need from you.
**********
My buddy James is going to prison for about 15 years. It's a long story and I'm not going to go into it on here.
James has a wife and 4 kids. His children will be adults the next time they see their dad in the "world".
I've never thought about this before, but what ministries/services are out there to adopt and/or take in the families of those who have been incarcerated?
There is a void here. Children need male-role-models. Women need godly friends.
I know of some great efforts when it comes to prison ministries, but what about their families?
**********
My Huskers had every chance to beat Texas on Saturday night. The "D" was outstanding. Suh gave one of the greatest performances I've ever seen. He was tossing around all-conference-offensive-lineman like they were high school kids.
An average offense from my Huskers would have won that game by 3 td's. But they didn't.
Statistically, Texas' "D" played great, but no one expected the Huskers "O" to do anything. They are awful. But Texas' "O" was averaging over 40 points and the Blackshirts shut them down. Every Texas point was aided by a 15 yard penalty...2 of the 3 should have been called.
When it came down to it, Texas made two plays when they had to have them.
Bo Pelini was the right hire. Defensive wins championships, and if they can figure out something on offense that works, they will be in the conversation soon.
Posted by Josh Ross at 9:11 AM 5 comments:

How about this finish?

This one is for all you addicted sport fans!

It Wrecked My Life

I moved to Memphis knowing that my calling was to do more than preach sermons on Sunday mornings. I felt a supernatural calling to be a voice for God in this city. So, when I moved here, I made a covenant with God that went something like this--"God, I need you to teach me how to love this city the way you love it. I want to mourn where you mourn, weep where you weep, rejoice where you rejoice, and love how you love."
It's been over a year and a half now, and I can say that this covenant has wrecked my life. It has transformed dreams, goals, motivation, ministry, vision, and the way I think about my checking/savings account. There are days when I want to go back to "normal"...normal being a life that seeks comfort, safety, and goals that serve to nurture my selfish desires.
However, maybe God is redefining "normal" for me.
Posted by Josh Ross at 4:48 AM 2 comments: