You Know You're Near an Extrovert...


You know you're near an extrovert when:

-You sit down on a plane and put earphones in even though you can't use electronics yet. It is supposed to be the nonverbal sign that you are not available for any form of dialogue. But then, you notice the person walking down the aisle who is commenting on every ball cap and t-shirt they see on complete strangers, "Hey, are you a Yankees fan? I can't stand them but I respect them. Hey, are you from Colorado? I noticed the Yellowstone shirt. I have a 2nd cousin who is from there." You cross your fingers hoping he doesn't have the assigned seat next to you. Then, he sits and completely ignores the fact that the ear pieces are in the ears and your eyes are down.

-You're at the bank filling out a deposit slip when the person walks in singing about how great the day is even though it is 10:20 in the morning and it has been raining for 3 straight days.

-You're friend calls you at 10:35pm to tell you about something that happened 4 days earlier.

-You're at a restaurant peeing at the urinal and someone walks in and begins smalltalk while standing 2 urinals away--"How was the food? Did it hit the spot? This place is awesome!"

Check out this piece by Mike Cope on professional complainers. For all church leaders, these are 3 paragraphs that will bless you.

**********
The NBA begins tonight. My Mavs take on the Wizards. They should get their first of 58 wins for the season. They will enter into the playoffs as the 4th seed and will get knocked out in the 2nd round.

**********
From the book The Tangible Kingdom:
When I walk into Starbucks, I don't think about coffee. I ponder the lives of everyone I see. I wonder about their spiritual journeys, their highs and lows...and where they look for direction in their search. My initial assumption is that in any room full of people, very few know Christ. I ask myself how I could get into their lives or how a conversation might begin. I don't see them as projects--that wouldn't go very far. I see them as souls the Lord loves who simply haven't seen or heard an accurate message about the Kingdom. I always feel confident that I may one day be talking with them about life and God. Oddly enough, this seems to happen all the time.
Posted by Josh Ross at 6:07 AM 6 comments:

God gave the 10 Commandments for this reason--they are to teach a bunch of slaves how to be human again. They are gifts; not heavy burdens.

The first 3 commands are directed to God:
1) No other gods before God.
2) No idols.
3) Don't misuse the name of the Lord your God.

Don't miss the significance of the 4th command, "Remember the Sabbath Day, and keep it holy."
The Sabbath Day is the gift from God that holds commands 1-3 and 5-10 together. Sabbath keeps us rooted in God and oriented in relationships. It becomes the bridge...the connection between God and people. It keeps us balanced.

In Ed Dobson's book The Year of Living Like Jesus, he wrote that before Americans lose sleep over having the 10 commandments in courtrooms, they need to take some time to consider how they are doing at keeping the commands. Most of us neglect at least one of the commands regularly, especially Sabbath-keeping.

God gives reminders throughout Exodus concerning Sabbath-keeping. As the people of Israel opened up the instructions for building the tabernacle, #1 was to keep the Sabbath. God knew that these slaves had lived in Egypt for hundreds of years where they spent every day building things with bricks. Even though they were oppressed, they had produced good stuff...buildings, palaces, statutes, etc. Slavery had made them into brick-builders, and they were good at it.
The reminders are found in: Exodus 23:12-13, 31:12-18, 34:21-24, & 35:2-3.
Why so many reminders?
Because God was fearful that His people would take their brick-building-practices to a new land, and if they weren't careful, they would consume themselves with building new stuff and forget where they came from.
And you know how the story goes...they forget!

Could it be that in Genesis 1, God isn't just showing himself as a creative artist, but that he is also teaching people how to live? Seriously, did God really need to rest after 6 days? He didn't even break a sweat. God spoke words and creation happened.

Here's the ultimate question for us, if we take time to rest, do we really trust that God will/can keep things going?

Sabbath is about trust, rhythm, and reminding ourselves of the story we live in.
Posted by Josh Ross at 6:45 AM 2 comments:

I returned from Louisville, KY late yesterday afternoon. Rick Atchley took a few young ministers to Bob Russell's retreat center. My soul is full. After pastoring the Southeast Christian Church for four decades, Bob has earned the right to lavish wisdom and grace upon young preachers like myself. For three days I became a sponge!

**********
Last week I finished Ed Dobson's The Year of Living Like Jesus. A couple of years ago, Ed Dobson read A.J. Jacobs book The Year of Living Biblically. Jacobs tried to follow the OT word for word the first six months of the year, and the NT word-for-word the last six months of the year.
From Jacobs, Dobson (Ed, not James) thought it would be interesting to try to live like Jesus for an entire year. An absurd thought, right? He found it to be a daunting task.
A Jewish Rabbi once told a Christian, "How can you call yourself a Christian while not reading the gospels every single week? You claim to follow Jesus, but you rarely spend time reading about Jesus."
Dobson's book wasn't thrilling, but it was inspiring. He spends too much time trying to dress like Jesus, eat like Jesus, and pray like Jesus. But the one thing that was challenging was the fact that living like Jesus is difficult. It's counter-cultural.
Who knows, maybe we should give it a try.
Posted by Josh Ross at 12:53 PM 1 comment:

I'm going to be out of pocket until Friday.
I love preaching at SVC!
Go Angels!
Cowboys need some serious help. Please join me in praying for them.
Posted by Josh Ross at 6:36 AM 2 comments:

Here's a blog I wrote a while back describing why I am a Husker fan. Check it out here.
For the first time in a long time, Pelini has the Husker defense playing like the blackshirts of old. They've only given up four touchdowns through five games. Next Saturday vs Texas Tech will present a challenge.
**********
I will never cheer for the Yanks or Notre Dame. NEVER!
**********
My ideal day: 83 degrees with a 5 mph wind during the day...58 degrees with a slight breeze throughout the evening. Memphis doesn't really fit the description.
**********
This question has no agenda whatsoever...but what do you think the average teacher should be paid in America?
Posted by Josh Ross at 8:19 AM 4 comments: 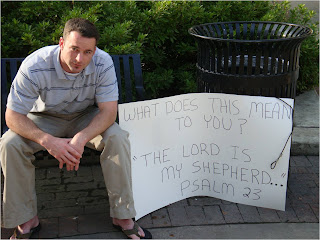 This was part of my sermon prep yesterday as I prepare to preach from Psalm 23. I spent some time with my buddy Jason Taylor at Court Square in downtown Memphis holding the sign as we engaged in conversations with people walking by. It made for an interesting evening.
Posted by Josh Ross at 12:10 PM 7 comments:

I need some help here:
Do you like the Psalms?
What is your favorite Psalm, and why?
Posted by Josh Ross at 6:46 PM 11 comments: